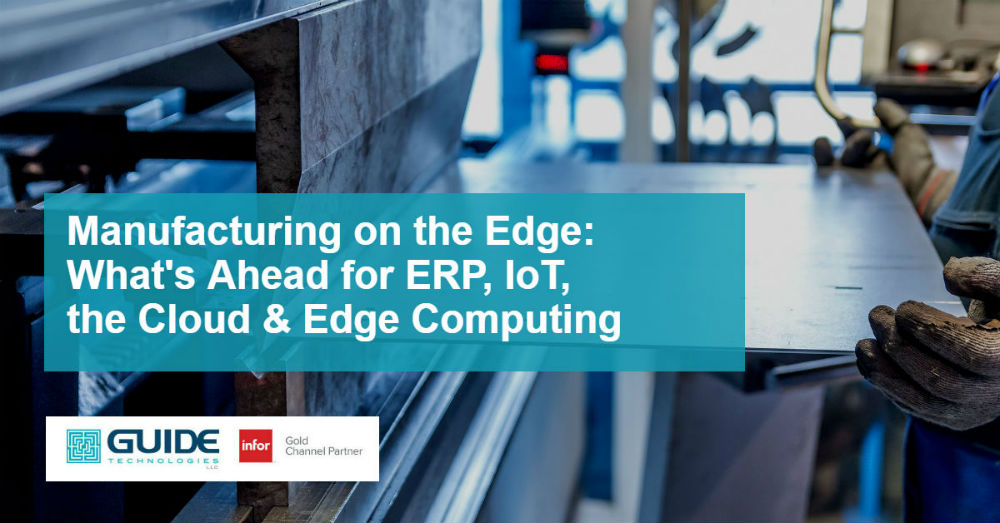 Manufacturing on the Edge: What's Ahead in ERP, IoT, the Cloud & Edge Computing

Cliffhangers have been an integral part of entertainment since 1980, when the TV show Dallas made them popular. Now in 2019 it seems every installment of a major show or movie franchise puts you right on The Edge of your seat, with characters figuratively (or sometimes even literally) hanging from The Edge of a cliff.

Well, entertainment has moved closer to The Edge and now the manufacturing industry has begun to embrace The Edge as well. Edge Computing, that is.

Edge computing can be defined as devices equipped with Internet of Things (IoT) technology that process data near where that data is created instead of sending it to the Cloud for processing. Using edge computing enables enterprises to analyze large amounts of important data in very nearly real-time. Real time data processing and intelligence is essential for robots, self-driving vehicles, and many other automated machines and technologies.

Edge computing is important to the future of manufacturing in several ways. When IoT devices aren’t as efficient as they should be, or can’t connect at all, edge computing can return fast data rates and backup responses. Since the data in IoT devices doesn’t have to go directly into a Cloud or over a network instantaneously, local edge computing can send only the important data over the corporate network and then compile the data and transmit them to a cloud or centralized data center for storage and further analysis. In turn, the Cloud can help inform the Edge. Machine learning models can be "trained" at the data center, then pushed out to run at the Edge.

This type of interplay between edge computing and cloud computing will be a key factor in the factory of the future, and ERP solutions has a leading role to play in how all this data is shared and utilized across the enterprise.

To stay ahead of the game, it’s always good to partner with a company like Infor who is dedicated to not only forward thinking in the world of cutting-edge IoT, AI and The Cloud, but putting its users' best interests first. This focus on the future is one of the many reasons Guide Technologies chooses to partner with Infor. We believe in their technology and their commitment to advancing the manufacturing industry forward.

Infor CEO Charles Phillips was recently asked what an Infor 3.0 era might look like. Among other things, he said, “It’s forgotten that it’s people using these systems and they’re making decisions. If you optimize around them, all the other systems should be serving them to make them better at their job.” It is clear that Infor is invested in making the experience simpler and safer for the worker.

The shift towards Edge AI has already begun with several large companies delving into its uses. Domino’s, Ford, Marriott and Toyota are some of the companies pouring money into AI and Edge AI research. Toyota has doubled down on autonomous car development, committing $1 billion to a robotics and AI research center. Marriott International teamed up with Samsung and Legrand to use IoT and edge AI to create the first IoT-enabled hotel room in the world. The rooms are personalized in many ways, allowing customers to customize their rooms based on information from the app that can connect to temperature controls and more.

In 2017, Domino’s and Ford Motor Company combined to develop a delivery system that uses autonomous vehicles. The companies used Edge AI to provide data, geolocation, predicted time frame and more. The system tracks the vehicles using GPS, notifies the customer on order progress and uses a mobile app to send a code to retrieve the food.

Edge AI enabled Domino’s and Ford to track every detail and gain valuable insight into customer experiences. Domino’s was even able to learn whether customers minded walking outside to obtain the pizza or if it mattered if the car was at the curb or had pulled into the driveway. All these tiny details may not matter much to any one individual, but when your goal is total optimization and you can gather an immense sample size the small things add up and become increasingly important.

So Why Use The Edge Computing and Where Does it Fit in The Cloud?

For the better part of the last decade, enterprises have been focusing on cloud computing, and they have been saying they want to “move to the cloud” or at the bare minimum “expand into the cloud.” Everyone has had a straight path with an obvious goal, but there’s a plot twist coming. This twist is Edge computing. Companies need to expand their thinking beyond the cloud and centralization, and toward location and distributed processing for low-latency and real-time processing.

Edge computing can raise overall customer engagement, operational excellence and your abilities to innovate. Small, incremental changes to existing products are important and happen often, but true to the industry explore how technology like AI and Edge AI can offer more overall growth.

The Cloud will have its role, but the edge is coming, and it’s going to be big. Stay tuned to see how the future of manufacturing unfolds!